Scootch Raccoon is the younger brother of Pinch Raccoon and the son of Wanda Raccoon and Walter Raccoon. He‘s rambunctious and bursting with energy and is often seen running towards people or things yelling "Yahhhh!!!" When Scootch is around, things often tend to get knocked over or broken. Scootch, however, is never intentionally mean, he simply has trouble containing his energy due to his young age. After knocking something or someone over, Scootch will always apologize with the phrase "Sorry, sorry, my fault." In "Strike Up the Band", he says this: "Well, What do you know? Not my fault!". However, his sister uses his catchphrase ("Sorry, sorry. My fault") in the episode Mayor Flick when she sneezes (before crying about her recipe being ruined after Scootch spilled her pepper). Scootch really enjoys playing with blocks, something which he can knock over and then build again. At times, Scootch has shown that he can control himself and not cause any trouble. Scootch and Baby Butter often play together. Scootch makes cameo appearances in some episodes.

Like Baby Butter, Scootch's vocabulary is very limited. Though Scootch has proven to speak somewhat more fluently than Butter, he rarely says much more than his catchphrase and almost always speaks in sentence fragments. He does have some knowledge of manners, such as when he says "thanks" after being given a toy firetruck as a prize.

His voice was provided by Cody Pennes, who also voiced Pinch Raccoon.

"Sorry. Sorry. My fault." - List of things Scootch has Destroyed or Run Into

Unfortunately, Pinch has to contend with Scootch, her disaster of a two-year-old little brother. Scootch is like a pre-school wrecking ball. The other kids dread to see him coming because they know whatever they are building or making, blundering Scootch will inevitably demolish it in his eagerness to join in. Scootch is a good kid, he just can't help himself.

Singing in a group

This one's not his fault. 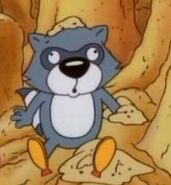 Scootch falling into a sand castle.

Community content is available under CC-BY-SA unless otherwise noted.
Advertisement